The Lycian Trail is 540 km from Fethiye to Geyikbayiri near Antalya. The author of the route is an American Kate Clow, who lived in Turkey and was fascinated by local history. She published a guidebook describing a route along the former trade routes of the ancient Lycian, Greek, and Roman civilizations. People liked it and now it is regularly included in the rankings of the most beautiful hiking trails in the world.

In 7 days we will walk 80 km along the western part of the Lycian Trail. You will remember the hike because of these: 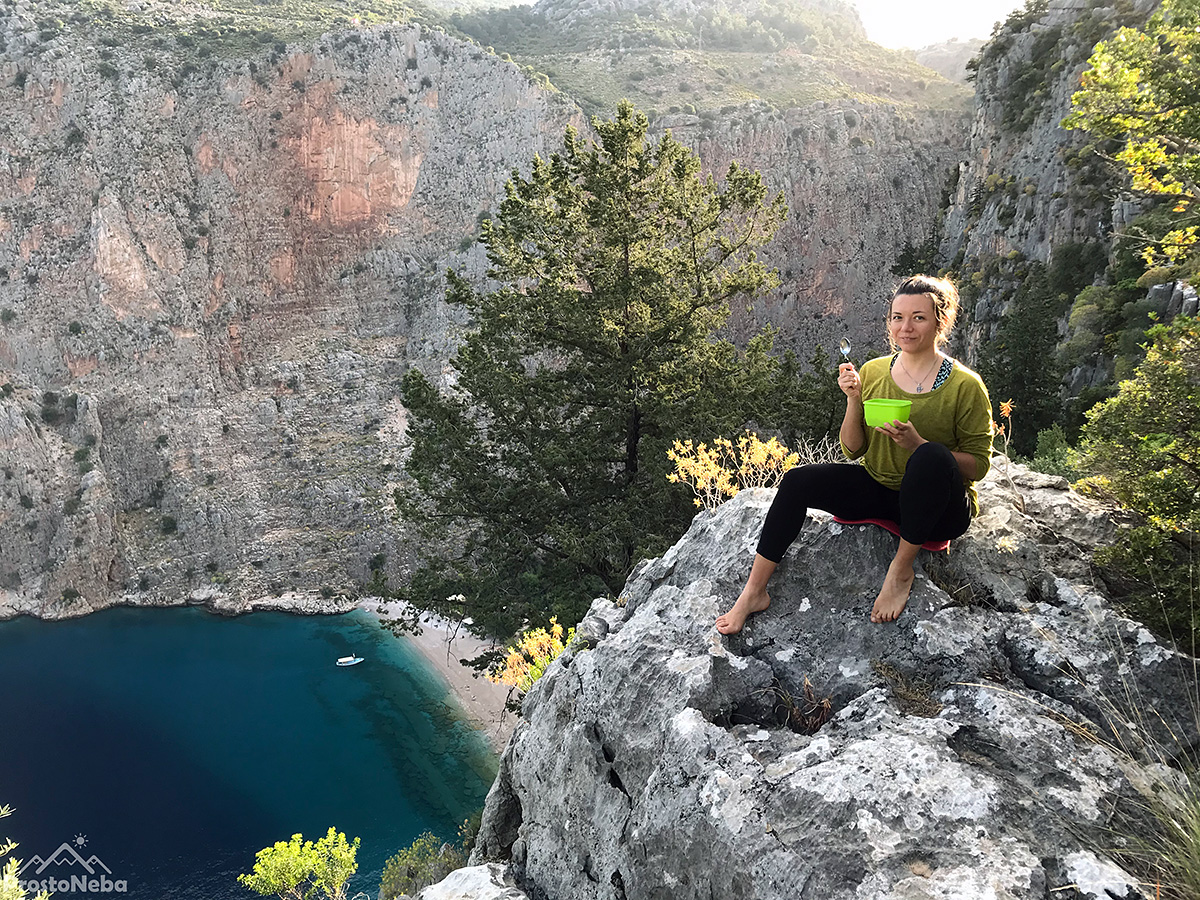 First you need to get to the city of Fethiye. There are flights to the city of Dalaman, which is 45 km from Fethiye. We can help you choose and buy the most convenient tickets. It is possible to get there with a guide.

Meet the guide at the hostel on the day before the hike or on the morning of the first day of the hike in Fethiye at the place the guide will tell you. 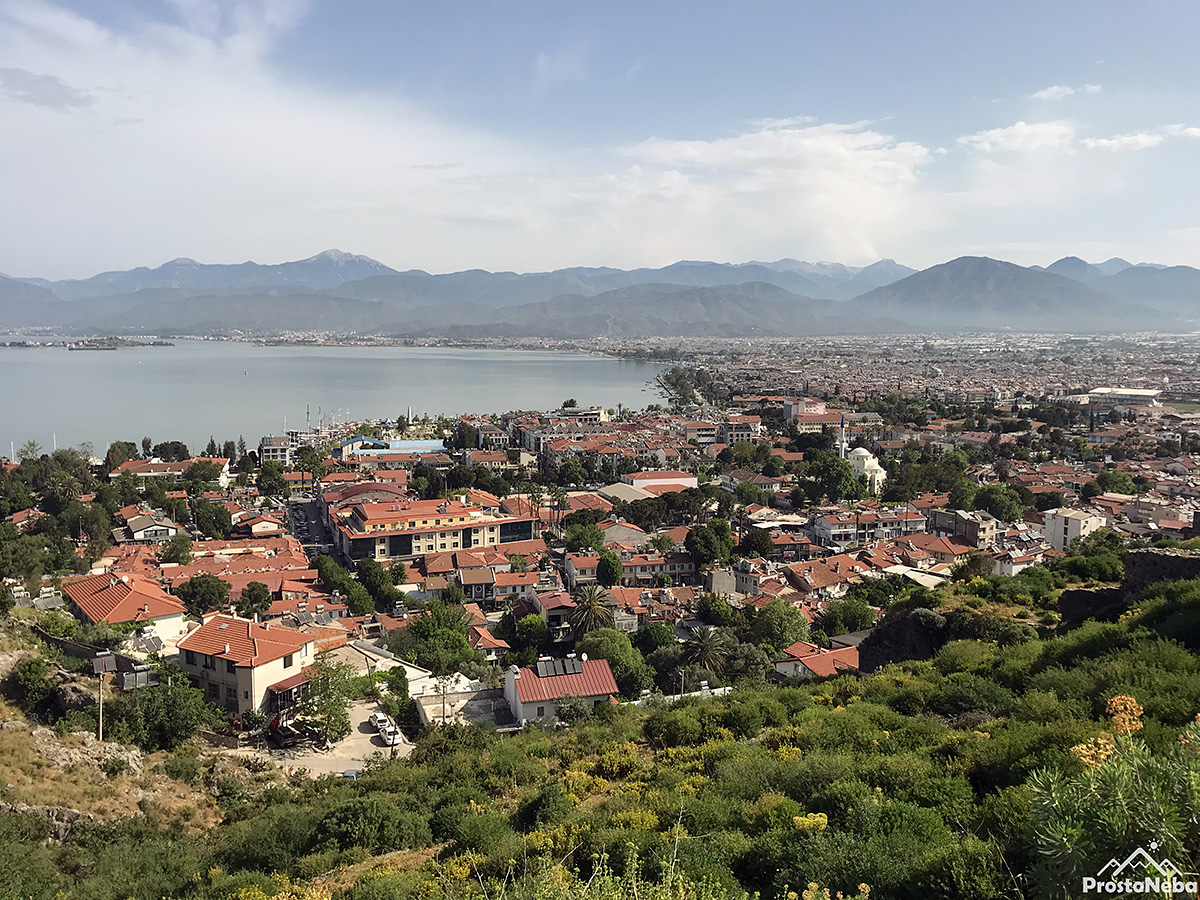 In the morning we walk in Fethiye. Southern Turkey is a seismically active region, and in 1958 an earthquake destroyed almost everything here. The ruins of the fortress of the Lycian city of Telmessos, which existed here before, and several Lycian tombs have survived. One of them is particularly impressive – the Tomb of Amyntas. On the outside there is an Ionic facade of the temple, carved into the rock in 350 BC, in honor of the son of Amyntas Hermapius. We will also ascend to the remains of the Crusader fortress on the hillside above Fethiye, built by the Knights of St. John in the early 15th century on earlier structures (possibly Lycian, Greek and Roman combined).

Then we go by public transport to the town of Kayaköy. The history of this place is interesting and sad. These are the remains of a settlement not as ancient as the Lycian tombs. It was once called Levissi, it was inhabited by Greeks. In the XX century they had to leave their homes. There are now hundreds of empty stone houses and Christian churches that are crumbling. In two churches the painting and the black and white pebble floor are partially preserved.

This ghost town is reminiscent of Turkey’s complex Greek-Greek relations in the past and attempts to achieve peace. Ottoman Christians moved from coastal Turkey to Greece (including Levissi and many other settlements) during a general population exchange controlled by the League of Nations in 1923 after the Turkish Revolutionary War. Because there were far more Greek Christians than Muslim Greeks, many Turkish cities were left uninhabited after the population exchange. In addition, like Fethiye, Kayaköy was badly affected by the 1957 earthquake.

After exploring Kayaköy, we enter a coniferous forest, which will take about two hours to the camping spot. In the forest we will meet the first turtles in this hike. Turtles in the forest, really? 😏 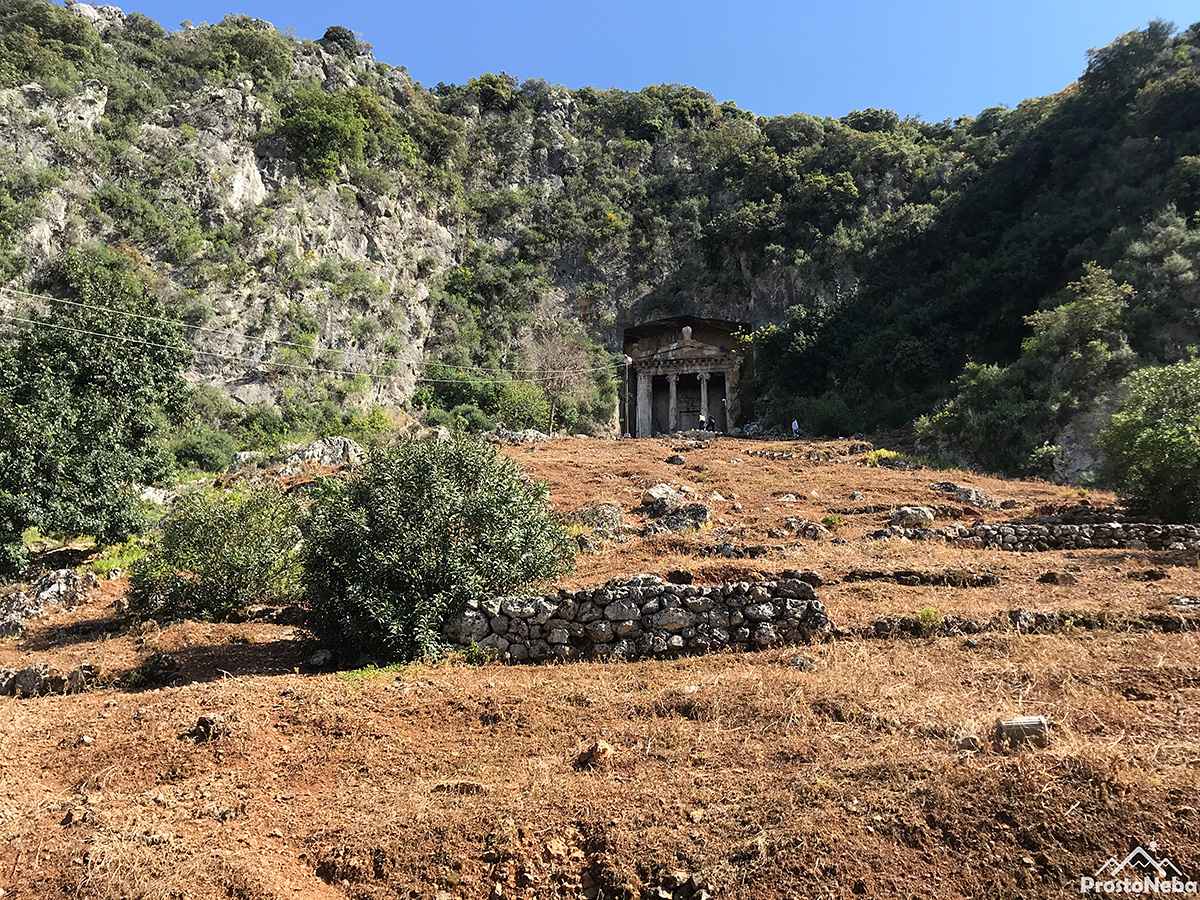 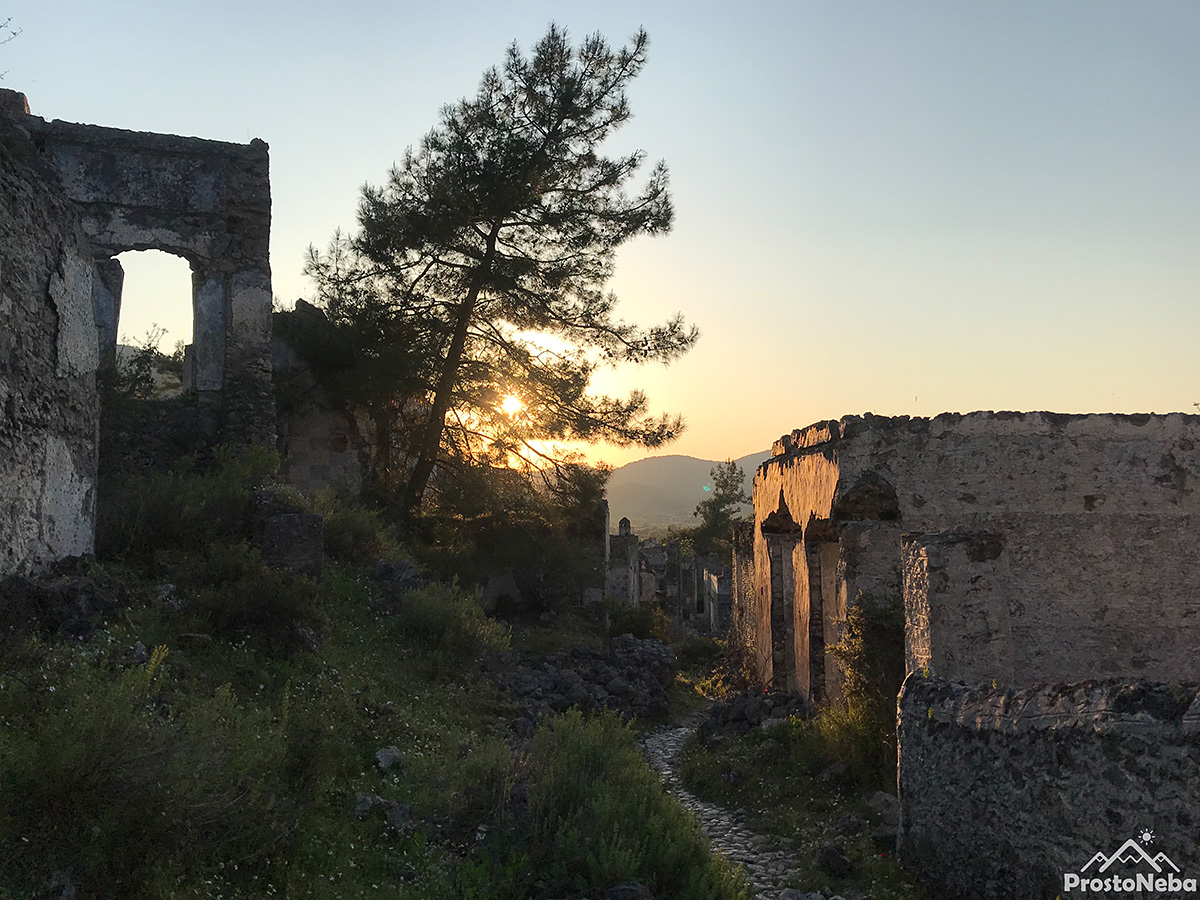 We wake up at 7 am – physical exercises, breakfast, cleaning the camping area – leaving the camp at 9 o’clock.

The trail first goes through a coniferous forest. In an hour we will see the first sea landscapes. Through the settlement of Oludeniz we will reach the arch, which marks the official start of the Lycian Trail. Classic gorgeous views of the Oludeniz Lagoon will begin soon. The trail will gradually gain height, climbing the spurs of the Baba Dag massif (1,989 m).

This day will end on the lawn near the village of Kozagac. From our camp site we will see the sea and the sunset. 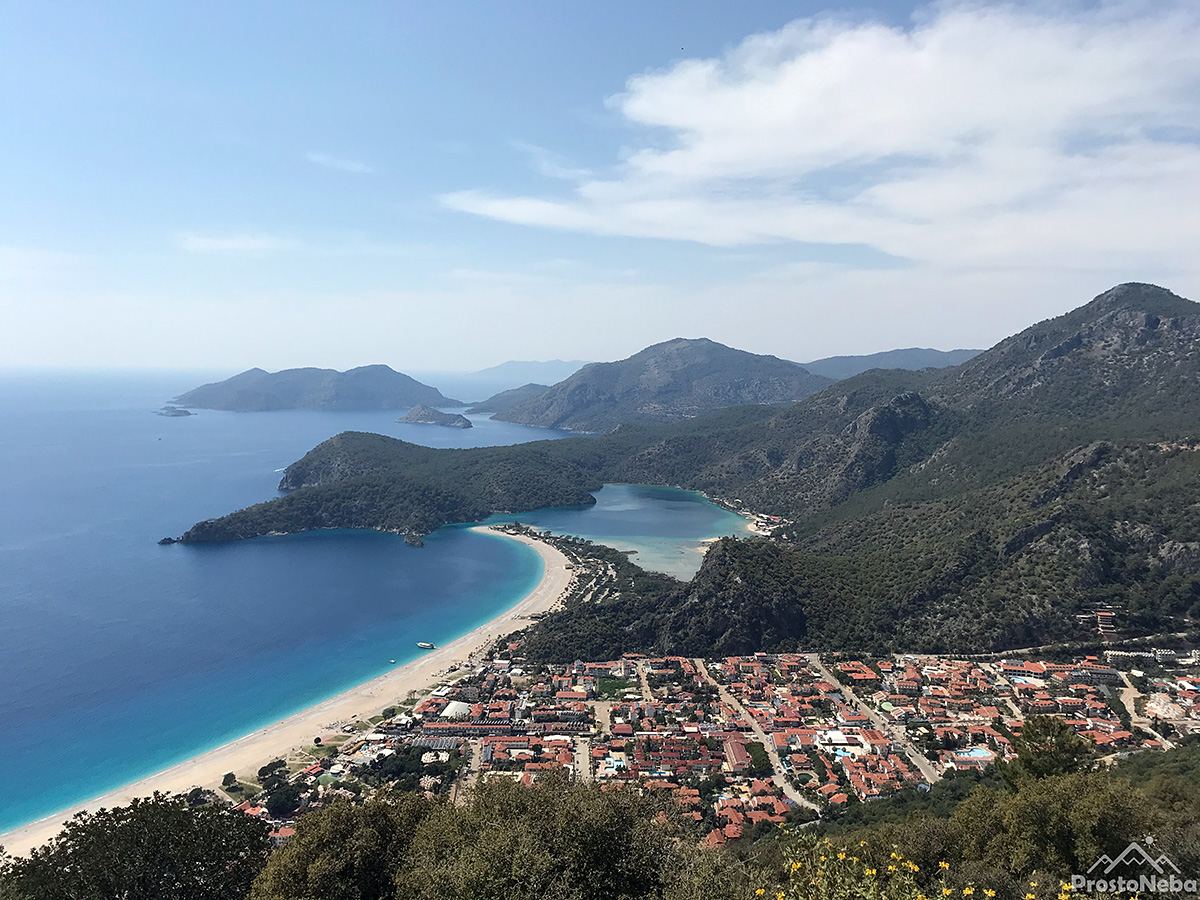 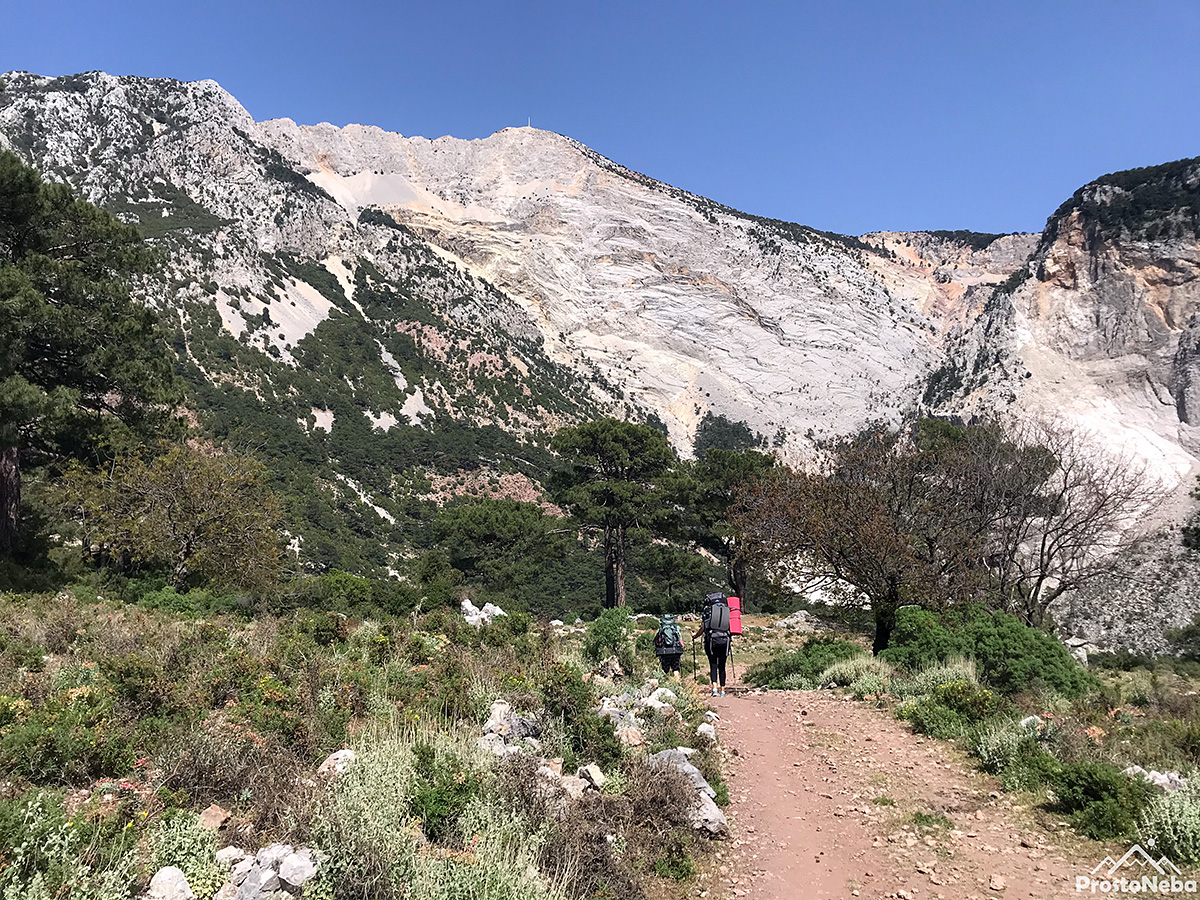 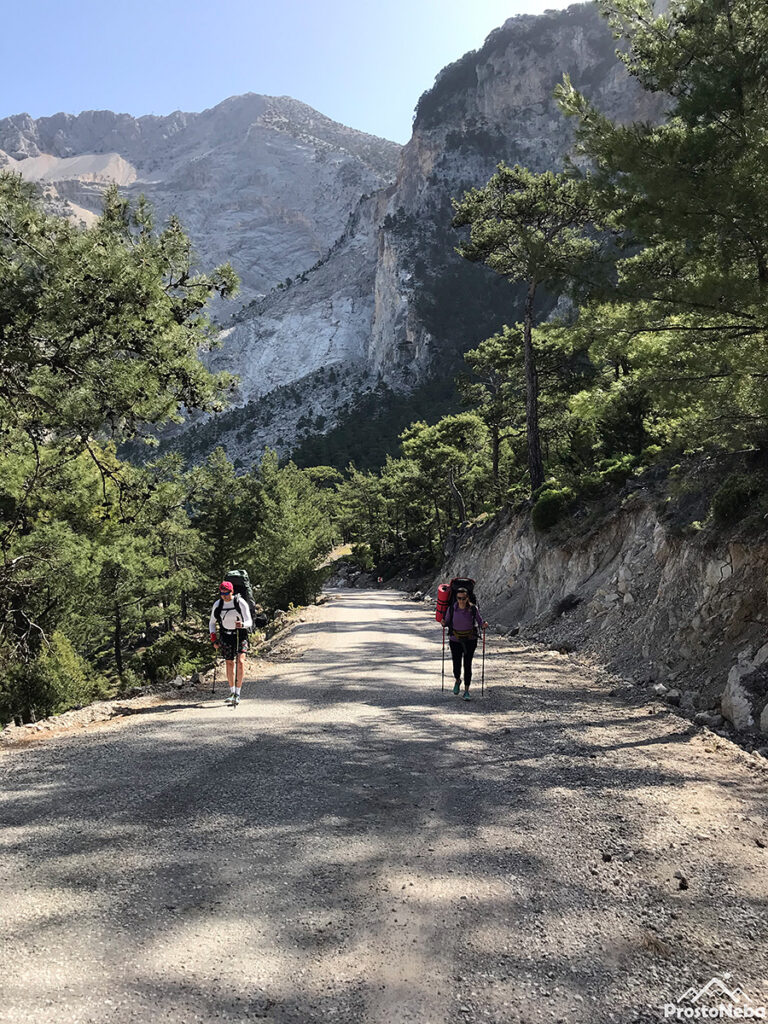 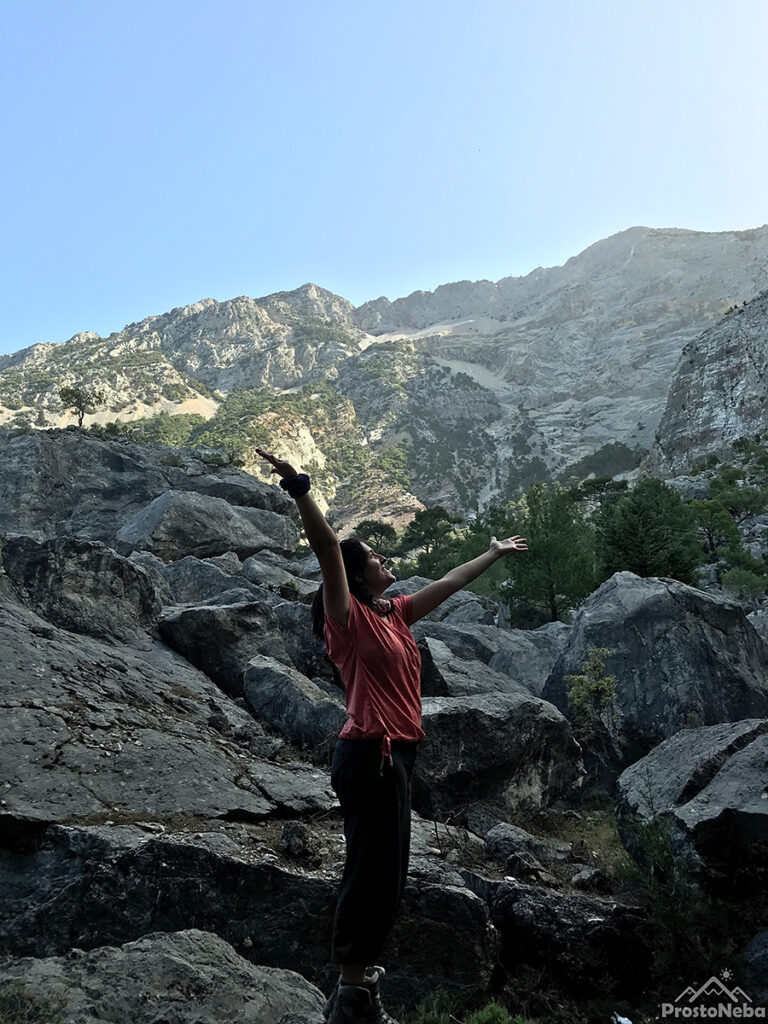 In a few hours we will reach the village of Faralya. It is located above the bay, which due to the microclimate suitable for the reproduction of butterflies, is called the Butterflies Valley. Among others, the Jersey tiger butterfly lives in this valley.

The beach of the Butterflies Valley can be reached only in two ways: by boat from Oludeniz or on foot by a very steep path that descends down the cliff from Faralya. If time and weather allow, we will go down without backpacks. The path is not easy. The descent takes 30-45 minutes, and the ascent – about an hour.

This day’s camping site is one of the most beautiful in the hike. In the evening we will look at the Valley of Butterflies from a height. 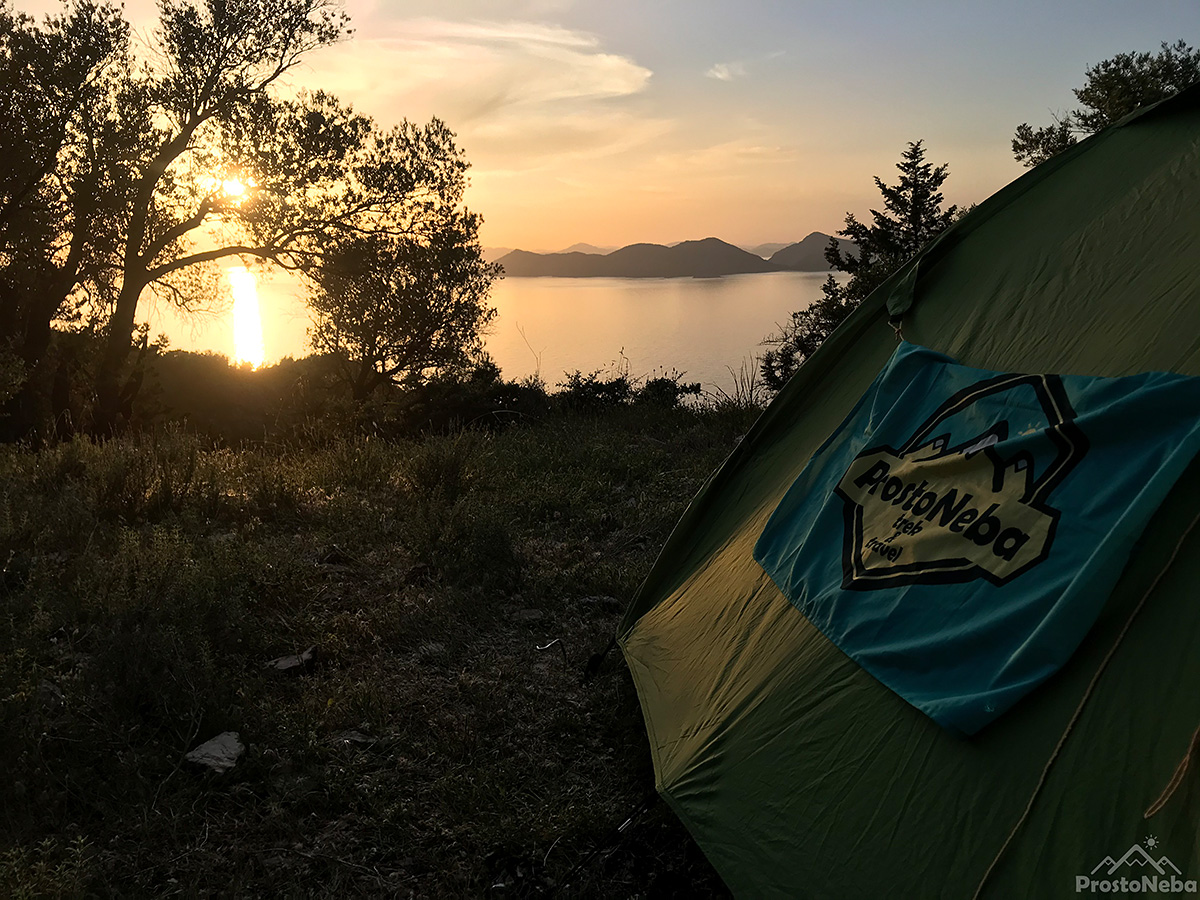 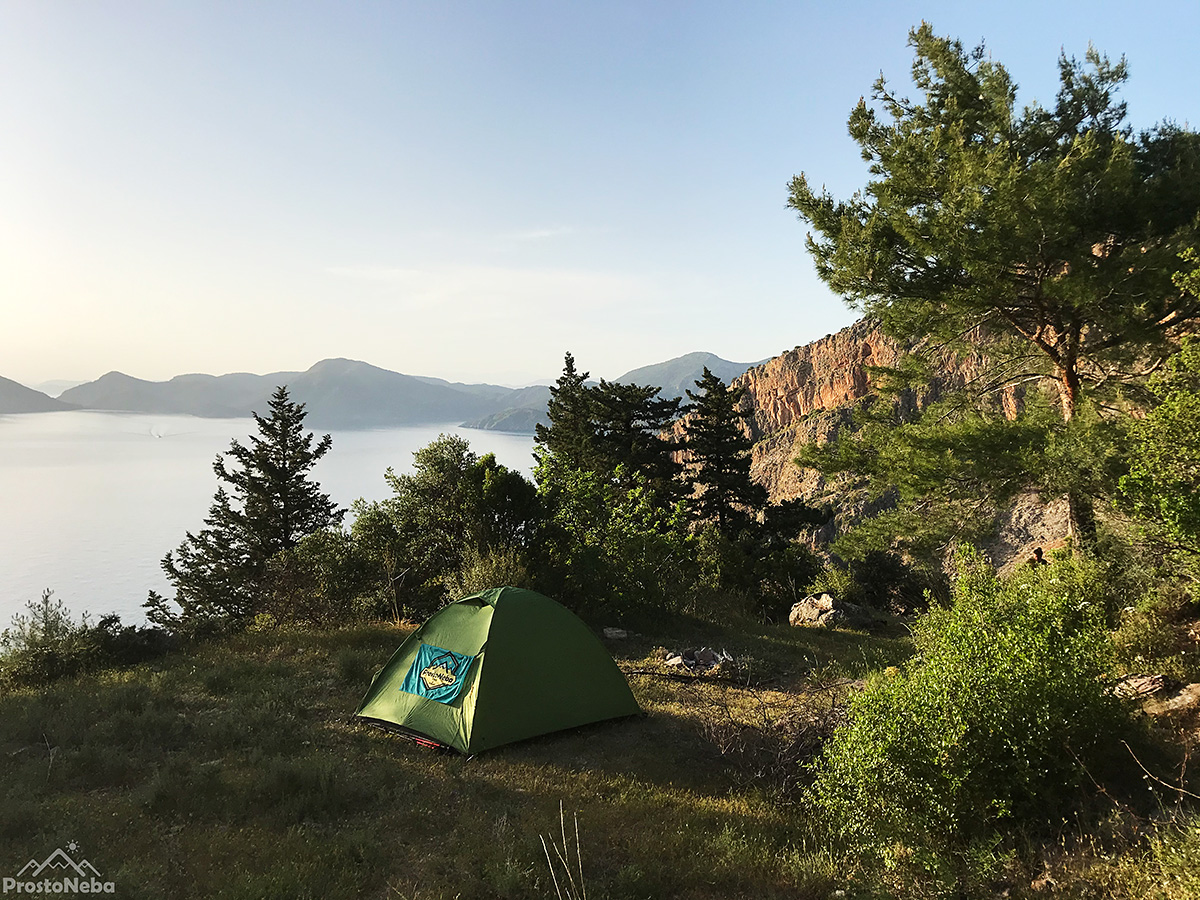 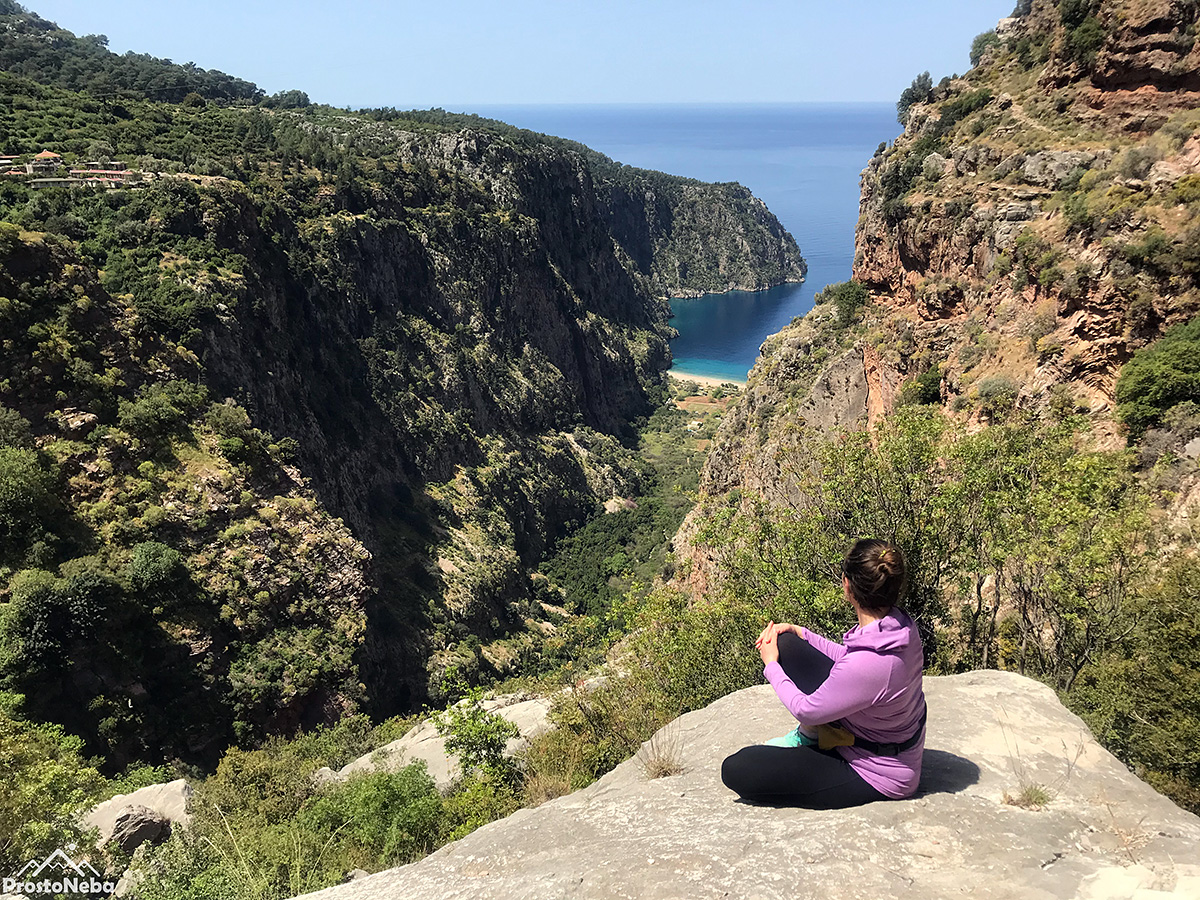 On the fourth day we have a simple hike to Kabak Bay. We spend the afternoon on the beach of the Mediterranean Sea.

It is one of the quietest places for a beach holiday on the entire southern coast of Turkey. It is chosen by locals, it is less crowded and has a relaxed atmosphere. It is said that the water in Kabak is warmer than in other valleys. Probably due to the fact that the rocks of the bay go far into the sea, closing the swimmers from the wind. Great place to swim and sunbathe. We will stay here until next morning.

In our campsite there will be a shower with hot water, a bar and a kitchen, a place for evening rest by the fire. 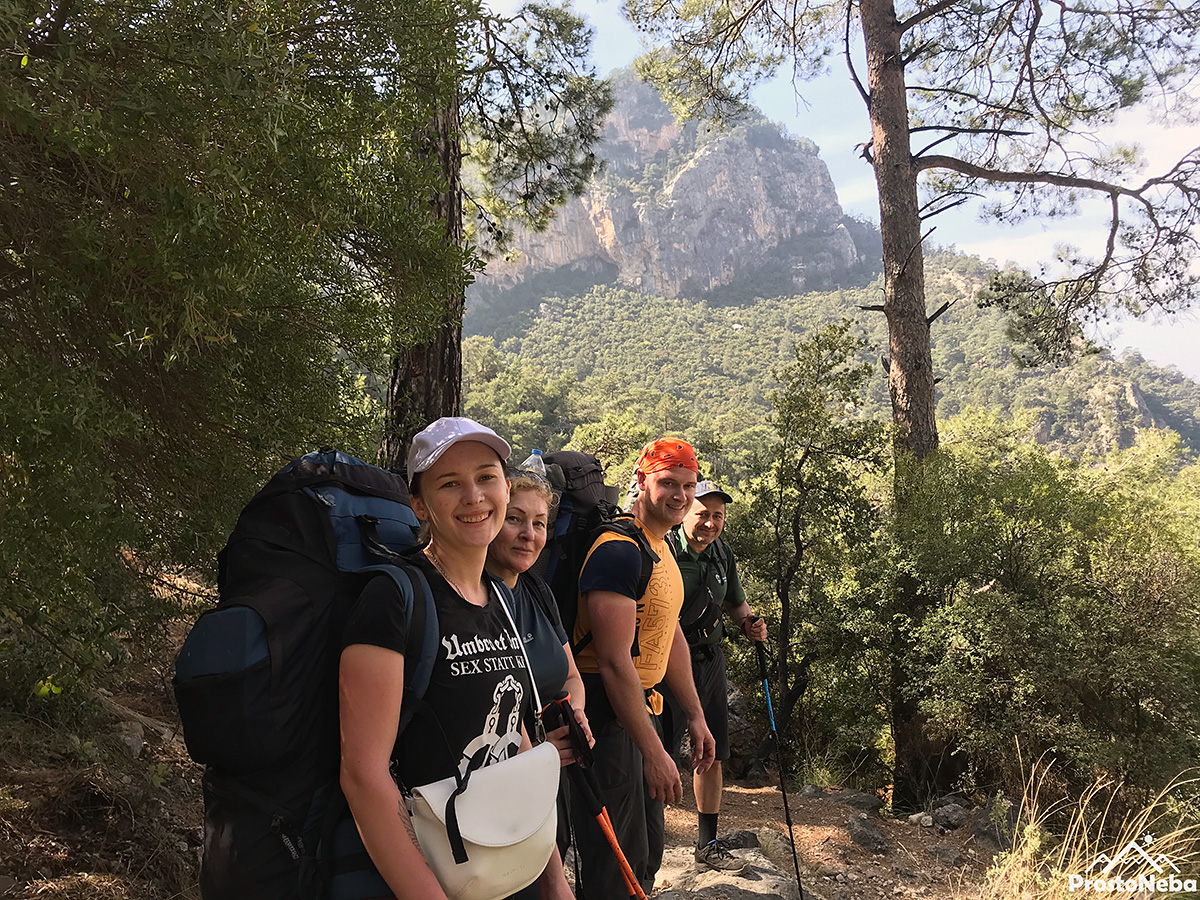 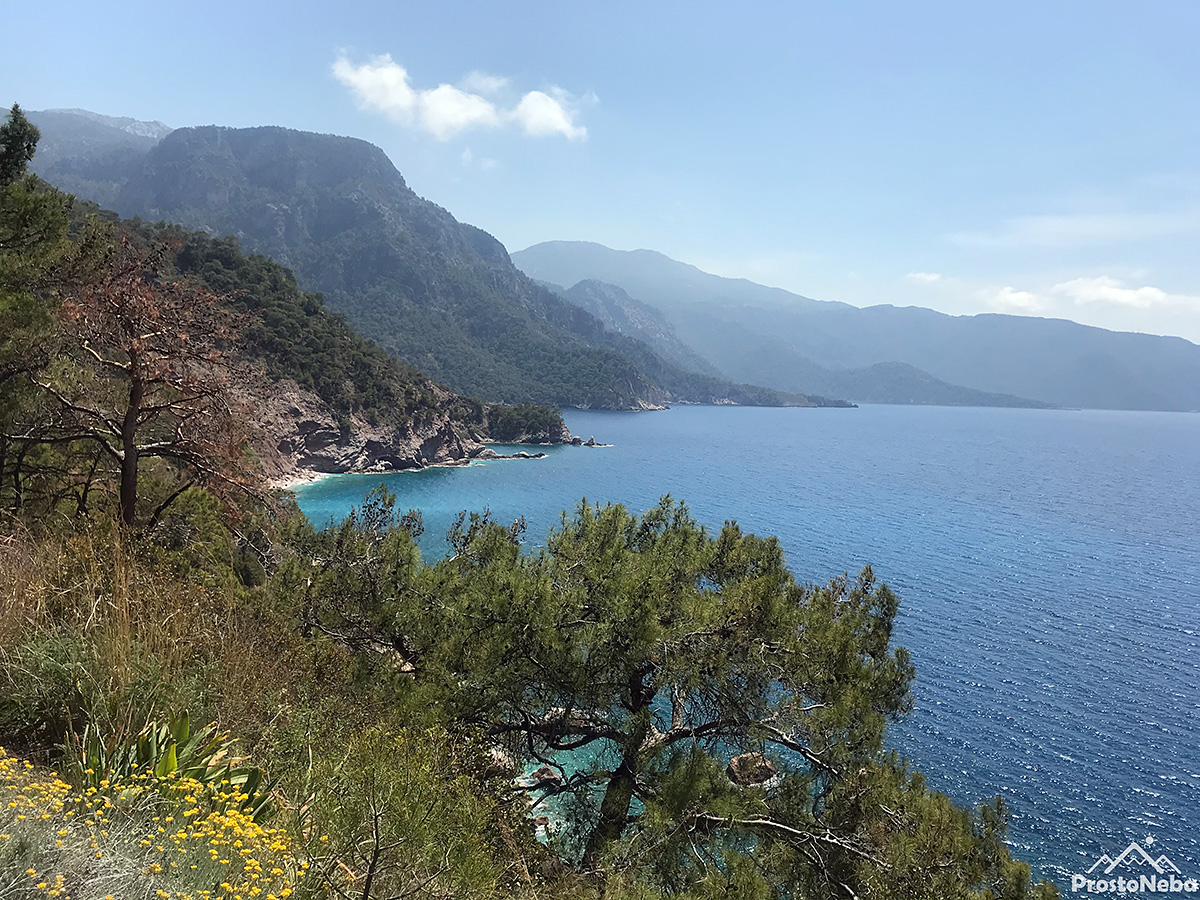 Honestly, because of the big elevation the day will be difficult. The Lycian path leads us from the sea to the mountains, from the very level of the sea we will climb to a height of 1000 m.

First we will go in the shade of a coniferous forest. Later we will see the walls of the high rocks of the Taurus Mountains, and below the narrow valley of Kabak and, as always, the beautiful turquoise sea.

Without backpacks we will go to the waterfalls hidden in the woods.

We spend the night on an open field near the village of Gey. The atmosphere this evening will be something like this: terrible fatigue in the legs, mountains, local shepherds chasing their goats home, a mule in a village mosque calling for pray, and we are eating dinner with view of the sea and sunset 😌 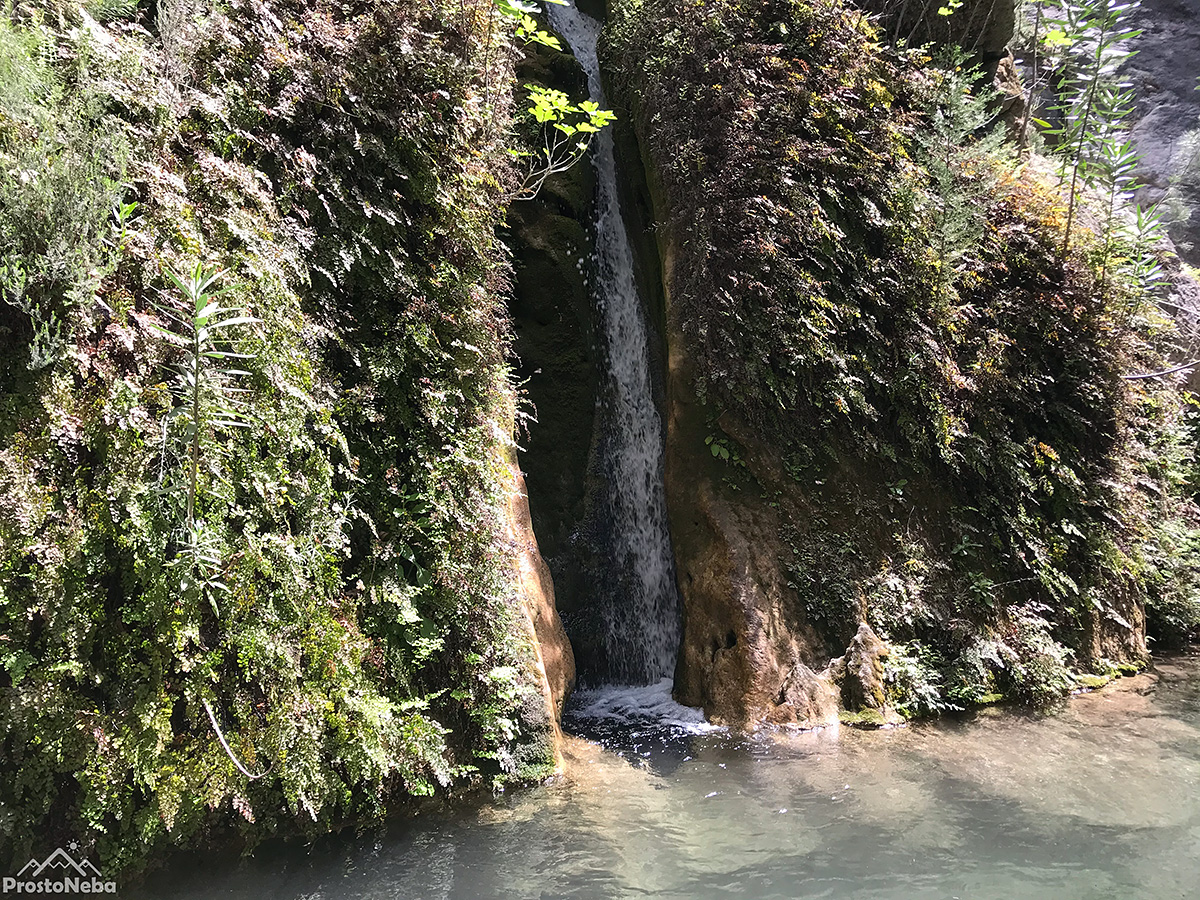 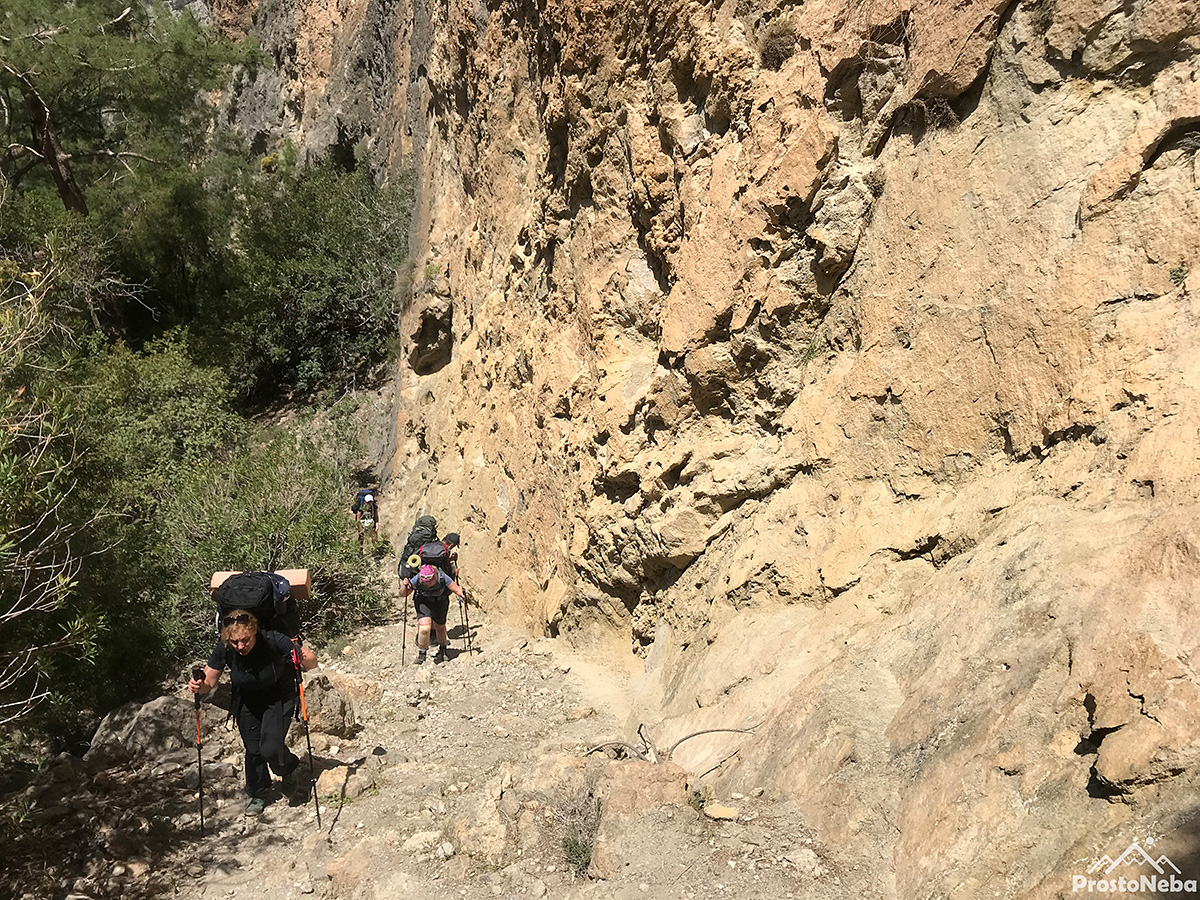 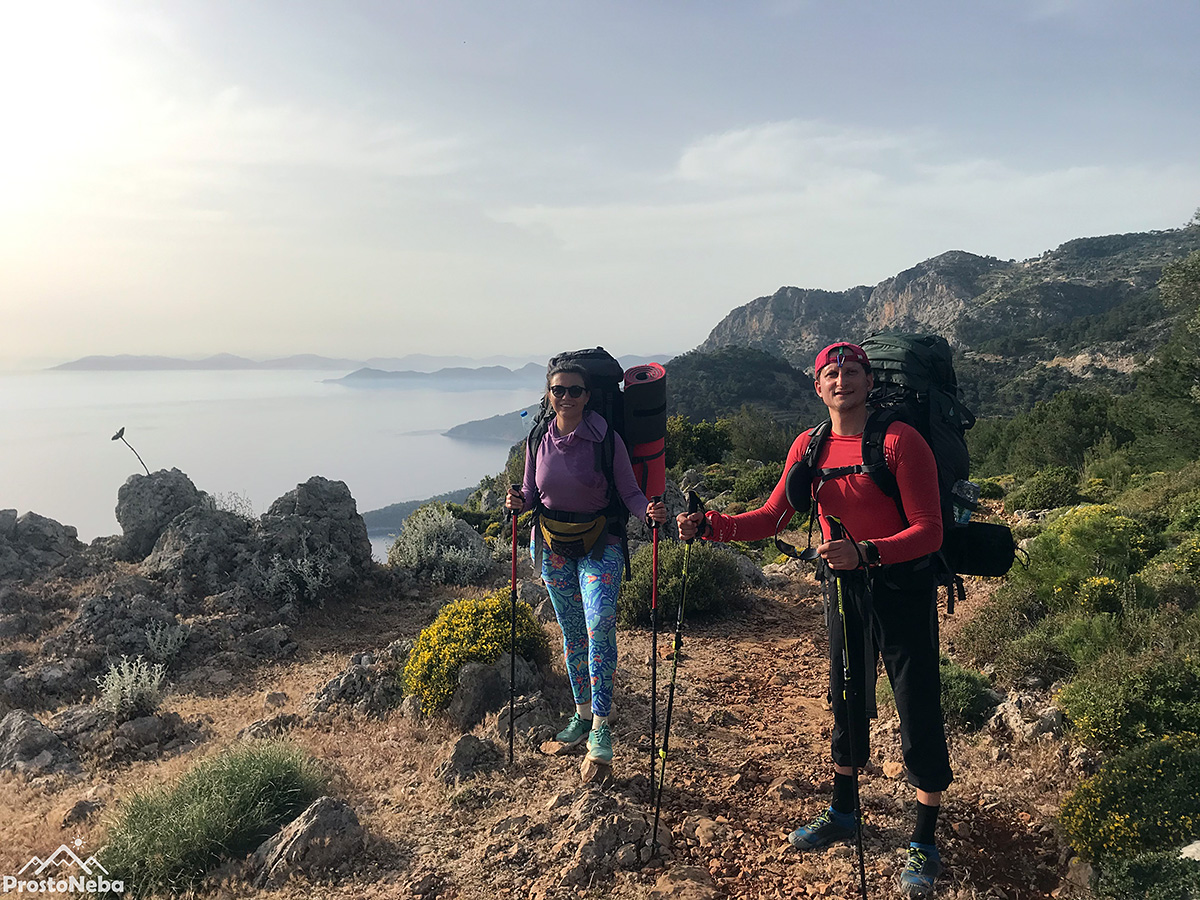 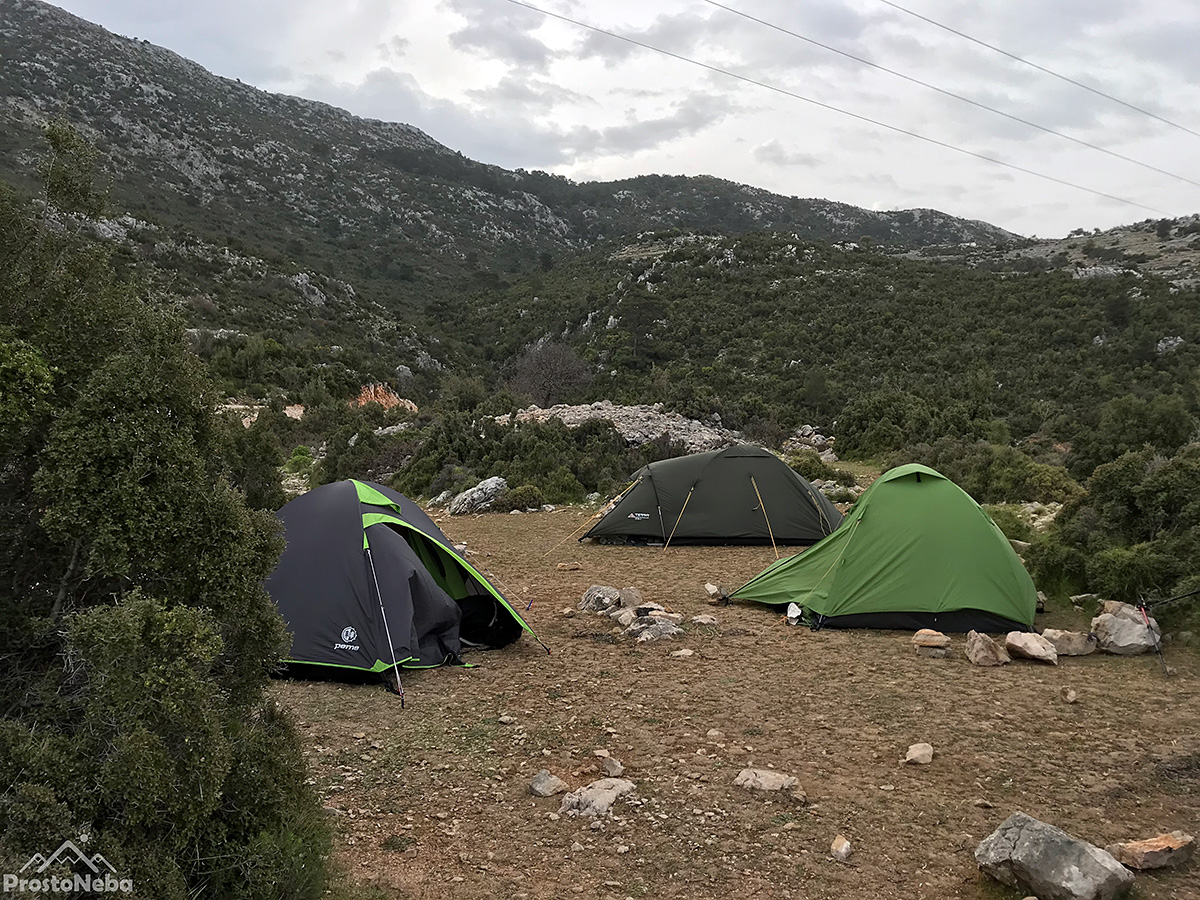 The first half of the day will be with ascents and descents. We pass through the village of Bel, where we have lunch.

In the afternoon we have a long descent down by the serpentine to sea level.

The day ends at the campsite (there will be a shop, shower, toilet, table) by the sea. We spend the night at one end of the sandy beach of Patara, 21 km long. 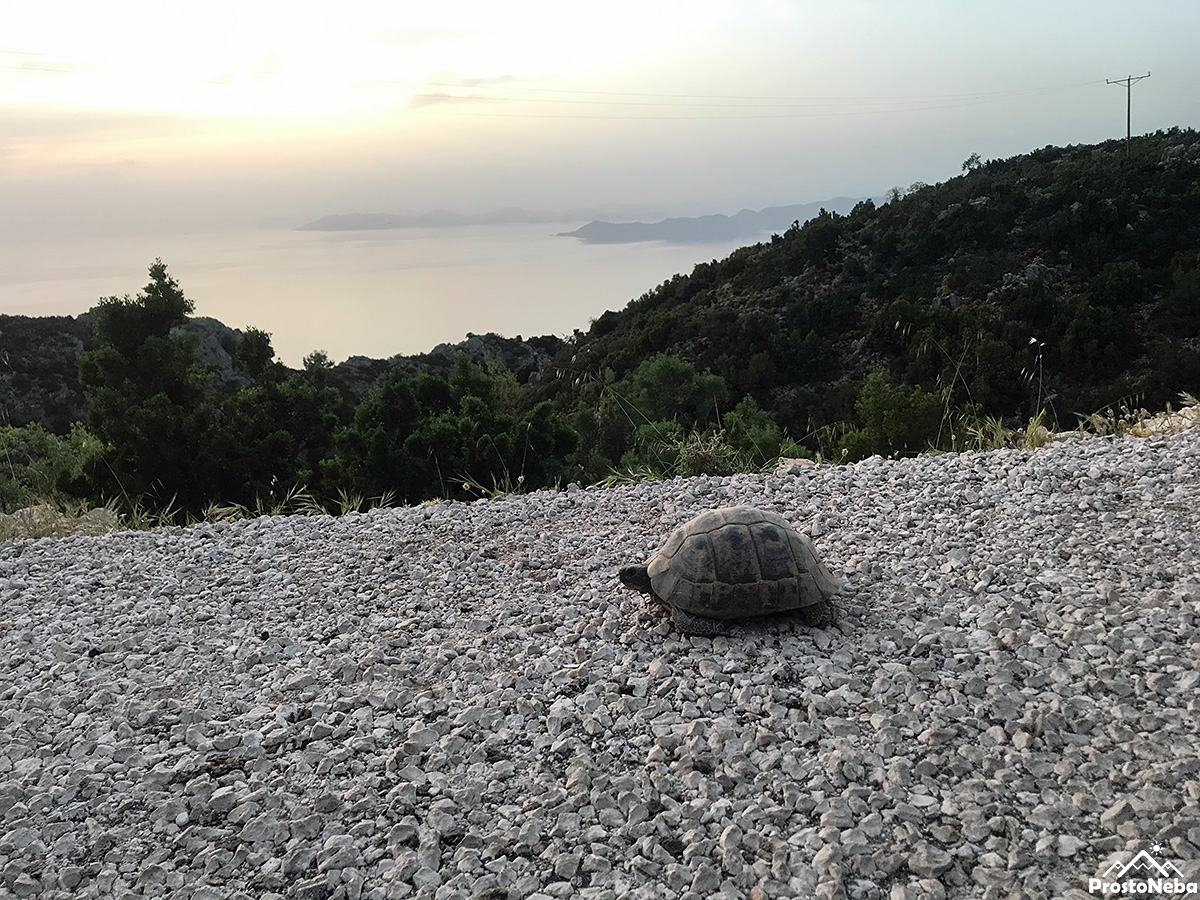 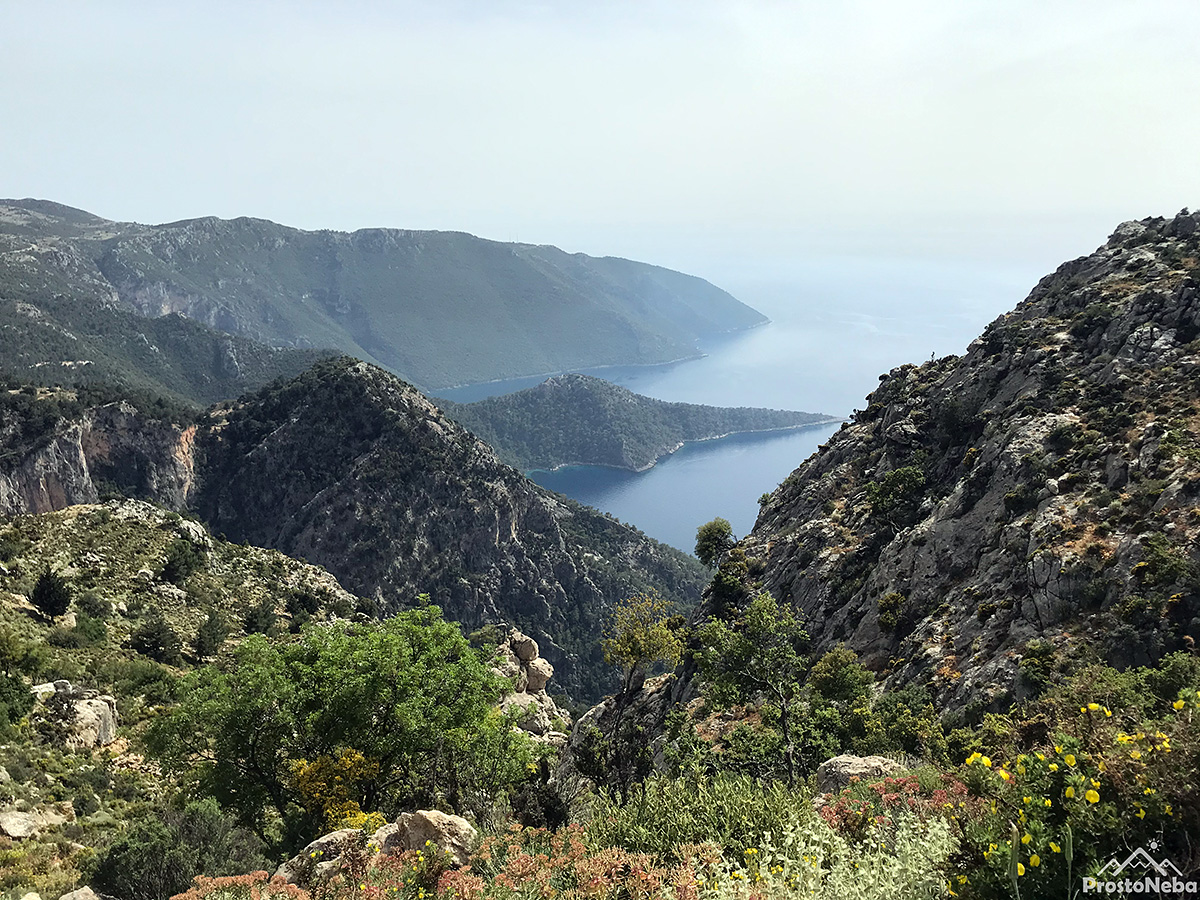 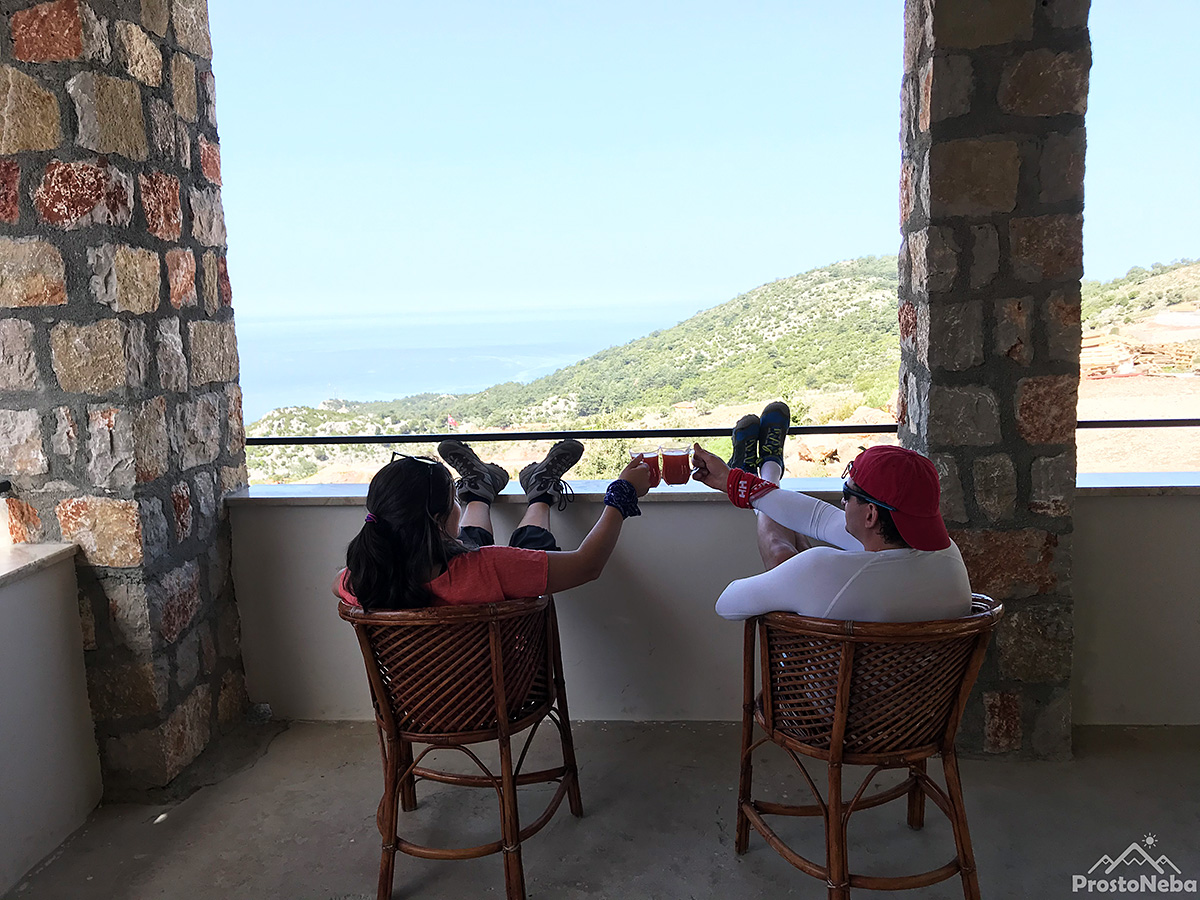 The last day will be cultural and historical, without hike with backpacks. In the morning there will be enough time for a leisurely breakfast by the sea and swimming in the Mediterranean. Then we will go to see the Lycian architectural monuments – ruins of the city of Ksanthos and the temple complex Letoon, which are included in the UNESCO World Heritage List.

Letoon was a religious center dedicated to one of the most important goddesses of Lycia – Leto. Leto was the mistress of Zeus and gave birth to Apollo and Artemis. Zeus’ wife Hera was not happy about this and ordered her to spend an eternity wandering from country to country. And so she spent a lot of time in Lycia, becoming a national deity. The open-air museum preserves the amphitheater and columns of the temples of Leto, Artemis and Apollo.

Ksanthos was the capital of the Lycian Federation and its largest city for most of Lycian history. Here is preserved the arch of Vespasian, an obelisk with a long inscription in Lycian language, the tomb of the Harpy, the necropolis (cemetery) and the Acropolis, the theater.

It is really interesting to walk around these archeological museum complexes. Everything is well preserved (and what is not preserved – is restored so that the differences are imperceptible). You can touch everything, go up to the burials in the necropolis, sit on the bench of the amphitheater. It is more interesting to walk on such ruins when you know the history and can imagine the events that took place here. The guide will help in this.

In the afternoon our hike ends in the city of Kinik, from where we take a bus to Fethiye or Antalya. 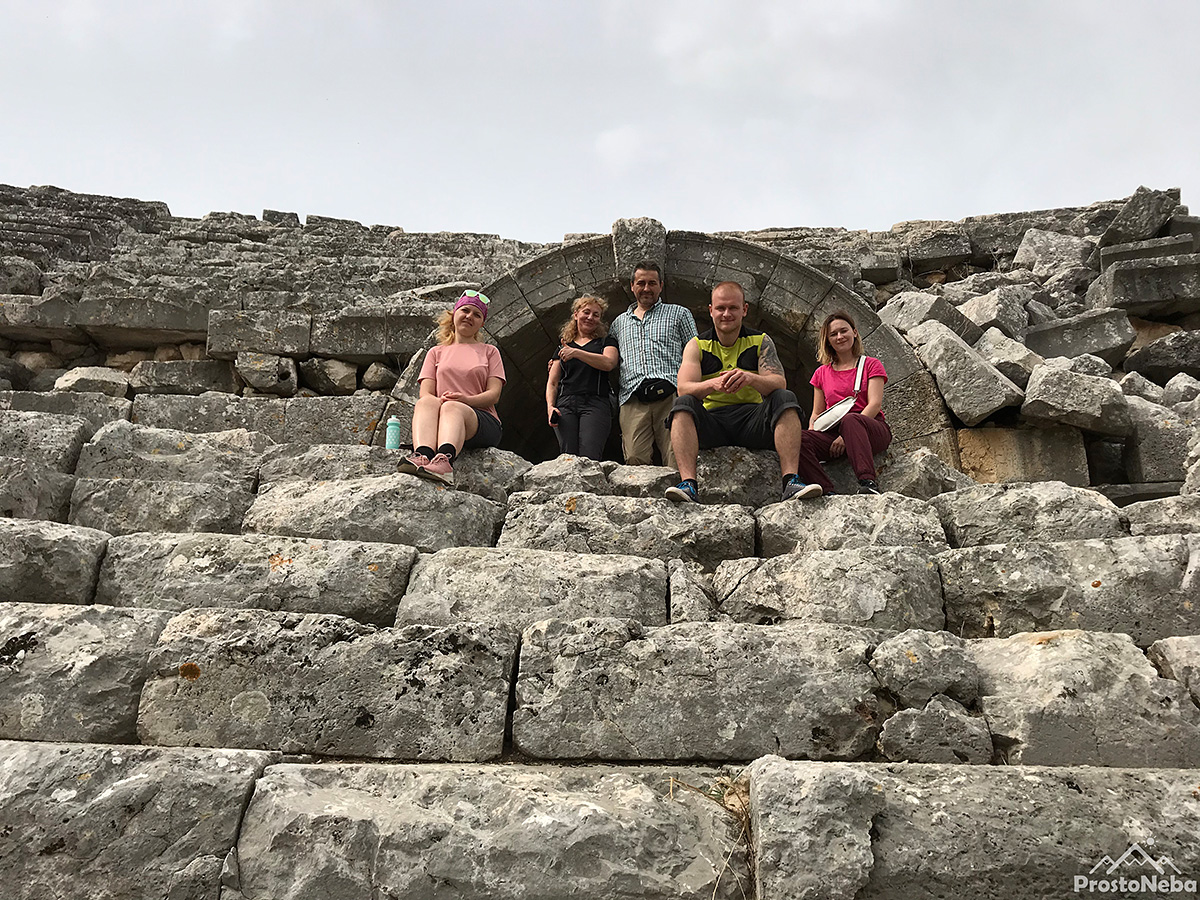 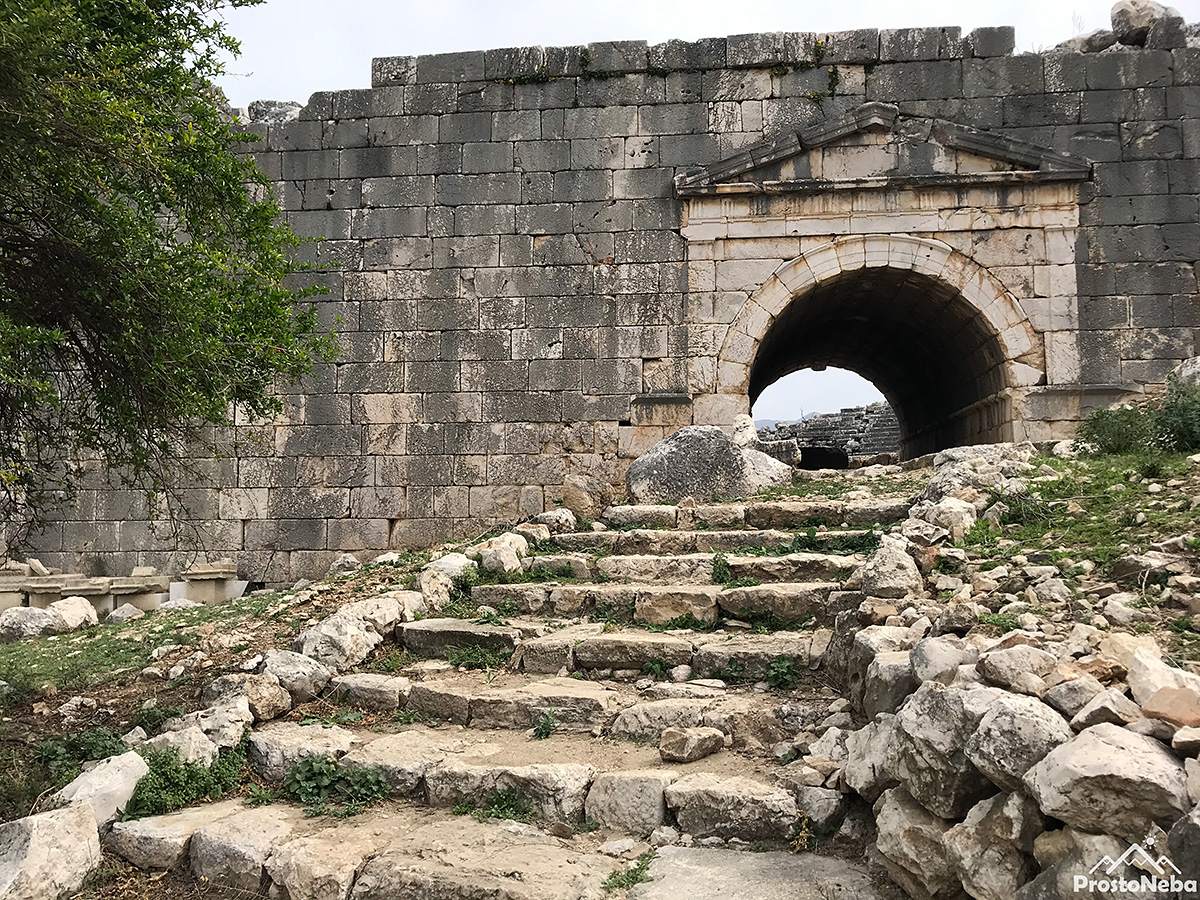 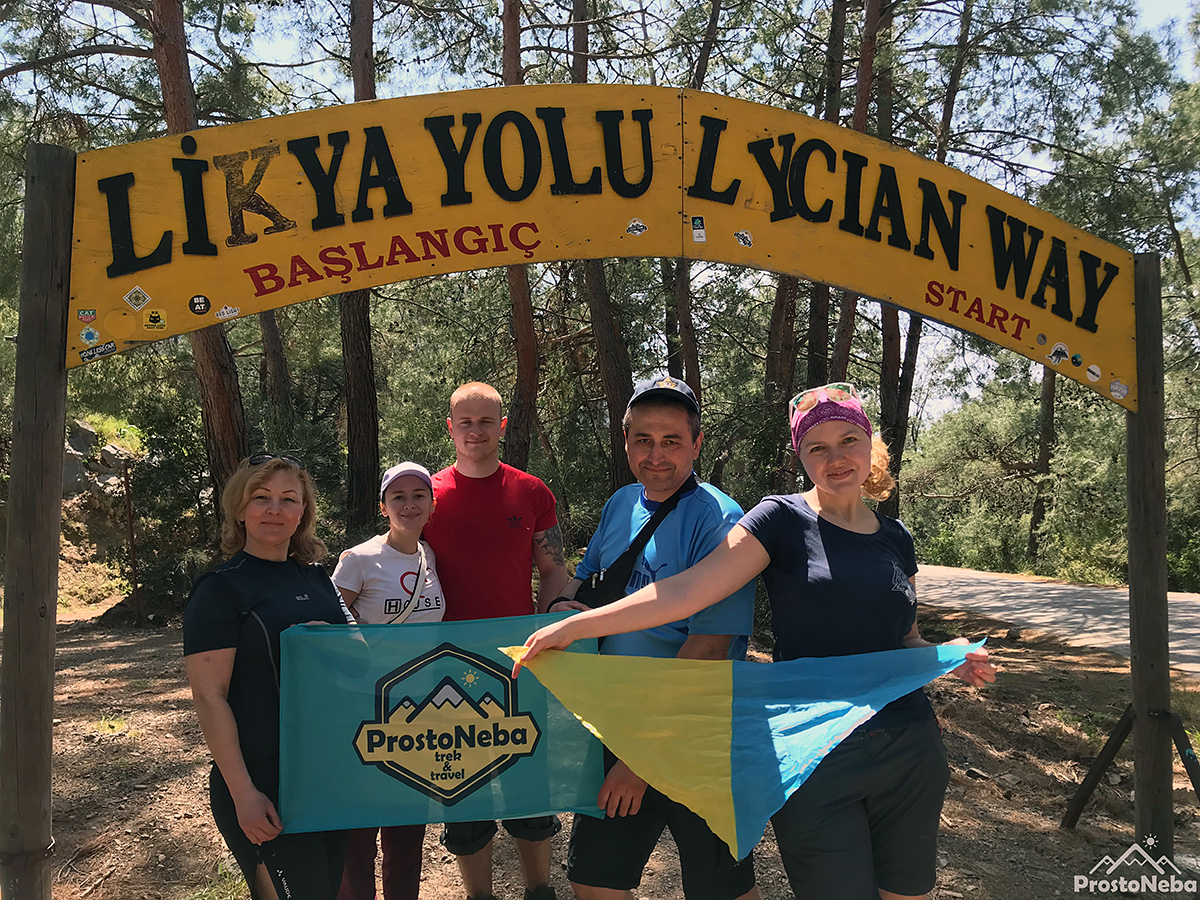 We meet in the city of Fethiye on the day before hike or until 10 a.m. on the first day of the hike. The specific time and place of the meeting is coordinated by the guide with all team members.

The end of the hiking part of the route is the town of Kinik. From the local bus station we can get to to Fethiye or Antalya by 8 p.m.

You pay in cash when meeting with a guide; prepayment is not required.

What is NOT included:

The size of the group is from 4 to 10 participants. Usually, we hike with small teams: it’s easier to find a common language, more comfortable to go at one pace. And also it is a requirement of the ecological principle leave no trace in the wild.

We will send you information about the guide after booking the trip for specific dates.

The weather in the mountains, and near the sea, is changeable, so any forecast is unreliable. Before a specific date of the hike, we will try to say as accurately as possible what weather to prepare for.

The rainy season in southern Turkey begins in late November and lasts until March. In other seasons it also rains, though not often. But this does not mean that you can not take a raincoat with you.

WHAT ELSE YOU SHOULD KNOW

The local currency is the Turkish lira (1 lira is about 3 UAH). Dalaman Airport has ATMs and currency exchange. In the cities it is better to pay by card, but we advise you to take some cash for the hike – we will pass small villages where you can buy fresh fruit and vegetables from the locals. The guide will buy something for everyone, but you may want something just for yourself. Prices are as follows: 15 TL – fresh juice; 10 TL – coffee; 2 TL – tea; 15 TL – pancake with cheese (a popular dish in the villages).

In large cities people understand English, in villages – only Turkish and gestures. We recommend that you learn a few words / phrases in Turkish to show your respect for the locals. If you come with us, we will send you a small dictionary before the hike.

We do not light a fire in this hike, as we usually do in the Carpathians. We cook food on gas burners and follow the rules of fire safety. Most likely, you heard about the fires in the south of Turkey in the summer. Fortunately, the Lycian trail itself did not suffer from them.