Travelling by train in Ukraine is probably the most convenient way of moving around here. And it’s certainly one of the best ways to see and feel this country. There are night trains which allow you to save some time and money while doing long distance trips (the country’s territory is huge), fast modern day trains (we call them «European style trains») and very authentic and old (we mean it, old) local trains.

Speaking with foreigners, we’ve found out that it’s sometimes vitally necessary to know how the railway works from the insider point of view. So here is the most necessary thing and tips about taking a train in Ukraine.

Let’s start with some basic knowledge.

Book ticket in advance if you can plan your trip. Especially when it concerns popular destinations (Lviv, Carpathians), public holidays or weekend. Lack of seats is typical, lack of comfortable seats is reality (believe us, you don’t want to take a berth near the toilet in a night train).

You are supposed to write down your full name (online booking) or just show your passport, so the cashier can write it down (offline booking) when buying tickets.

The price is the same no matter when you buy. However, it’s a bit lower for working days departures.

There are 3 ways to book: 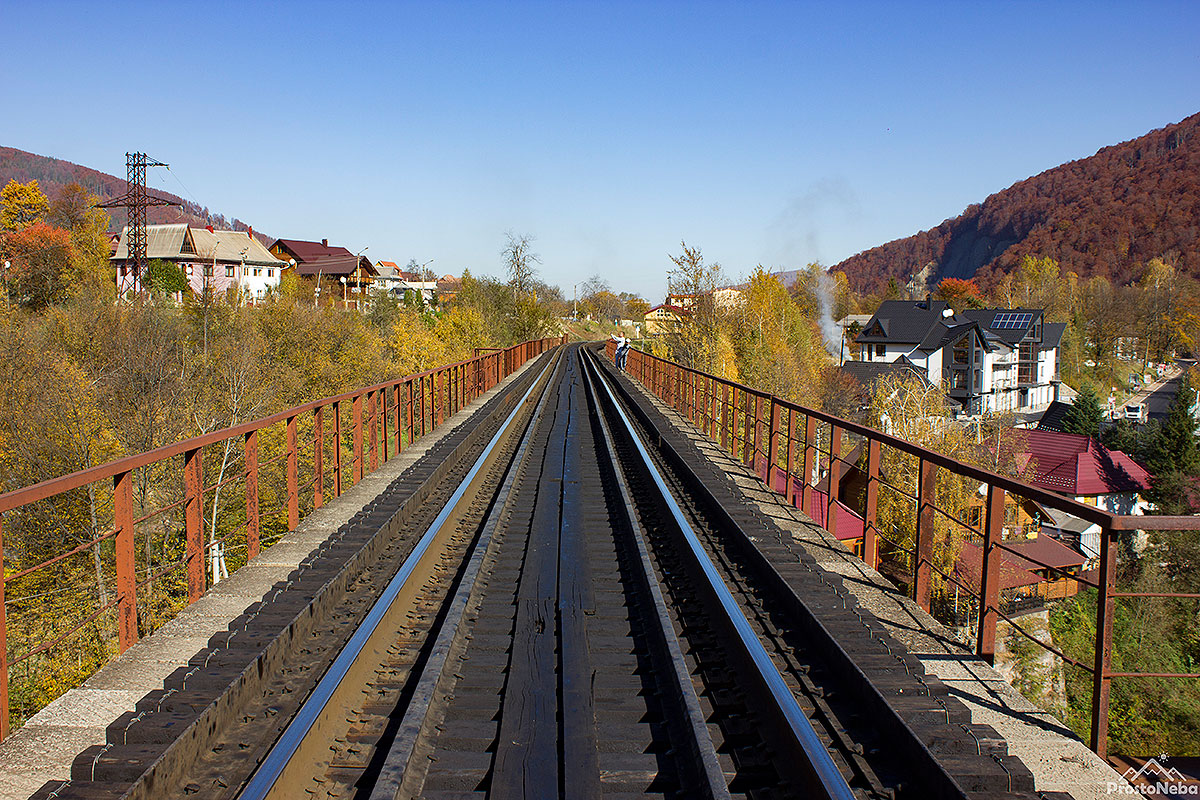 Trains in Ukraine are operated by the Ukrainian railway company (Укразалізниця, Ukrzaliznytsia). It’s a monopoly that controls all railroad transportation in the country.

There are several official types of trains, but practically the main categories are:

Let’s take a closer look at them.

These are clean and the most expensive (relatively to other types in Ukraine) trains. They connect Kyiv and major Ukrainian cities.

Intercity trains are closest to those in so-called developed countries: their speed is on average more than 140 km / h, the cost of travelling starts from 100 hryvnias per 100 km, clean cars with airplane-style seats, a cafe, air-con, often equipped with wi-fi and plugs.

The speed of riding on average is 80-100 km / h. Therefore, this type of trains is the best choice for travelling at distances more than 350 km. They usually run at night, so you can sleep in it and in the morning start to discover a new city.

These trains have Soviet-era or relatively new cars. So if you get a proper sleep depends on how lucky you are.

4 Class (Zahalny vahon). Berth. Price: 15 UAH per 100 km. In each compartment, there are 6 passengers instead of 4. Officially you are supposed to sit inside. However, you can also take a nap on the upper berth. Not every train has cars of this class, usually short distance trains (for example, Lviv – Ivano-Frankivsk train).

There are compartments with berths, but these compartments have no doors. Four berths at one side of the carriage, and two at another.

2 Class (Kupe). Compartment. Price: 150 UAH per 100 km. Typical compartments with four berths and doors. It’s more likely to have an air-con and generally more clean conditions in this class. It’s also considered to be safer.

1 Class (Lyuks or SV). De luxe. Price: 400 UAH per 100 km. Compartments have 2 berths. But it’s not that luxury as you may expect. This choice is perfect for couples.

The slowest and cheapest trains. You should use this type of trains if you’re trying to reach a small village or town. Their routes usually do not exceed 100 km.

A local train departs from a big city and makes a stop in almost all settlements that are scattered around the railway. For instance, it is a perfect way of getting to the Carpathian mountains from Ivano-Frankivsk.

The price in such trains is unbelievably low, 3-4 times lower than the bus ticket. The fare for such trains is 10 UAH for 40 km, tickets can be purchased at the ticket office (not to be confused with the long-distance courier) and directly in the carriages.

Inside there are benches for sitting, no air-con and toilet is just a hole in the floor.

The period of operation of such trains ended at the end of the Cold War, which leads to their frequent breakdowns, and accordingly, the canceled departures and significant delays (possibly even up to 3 hours), there are also cases when diesel trains get on fire, or passengers need to help the engine to work. 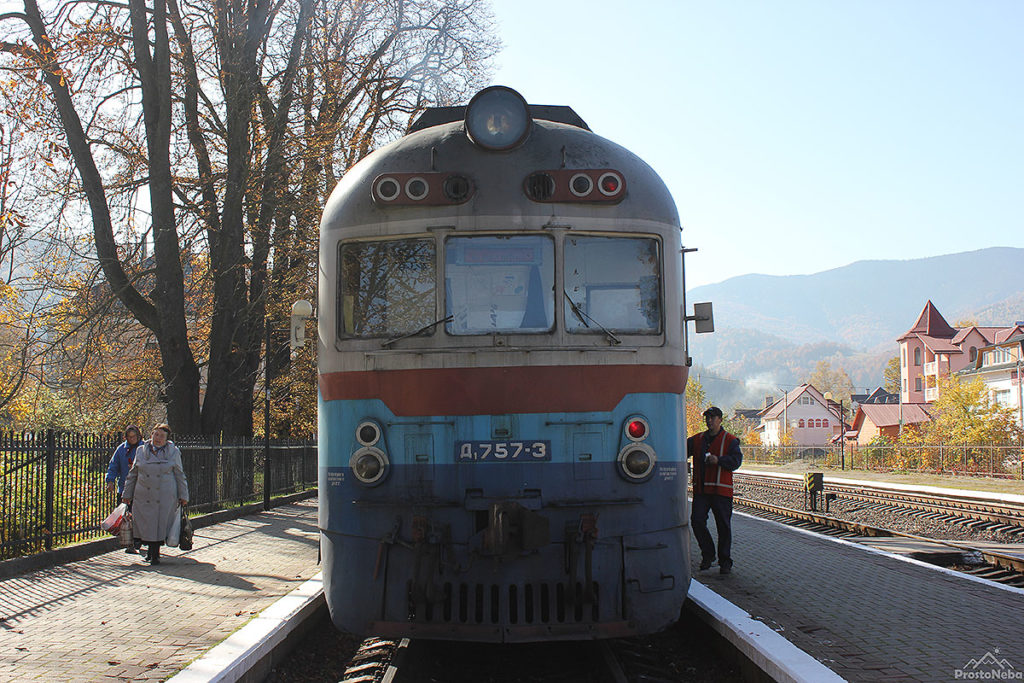 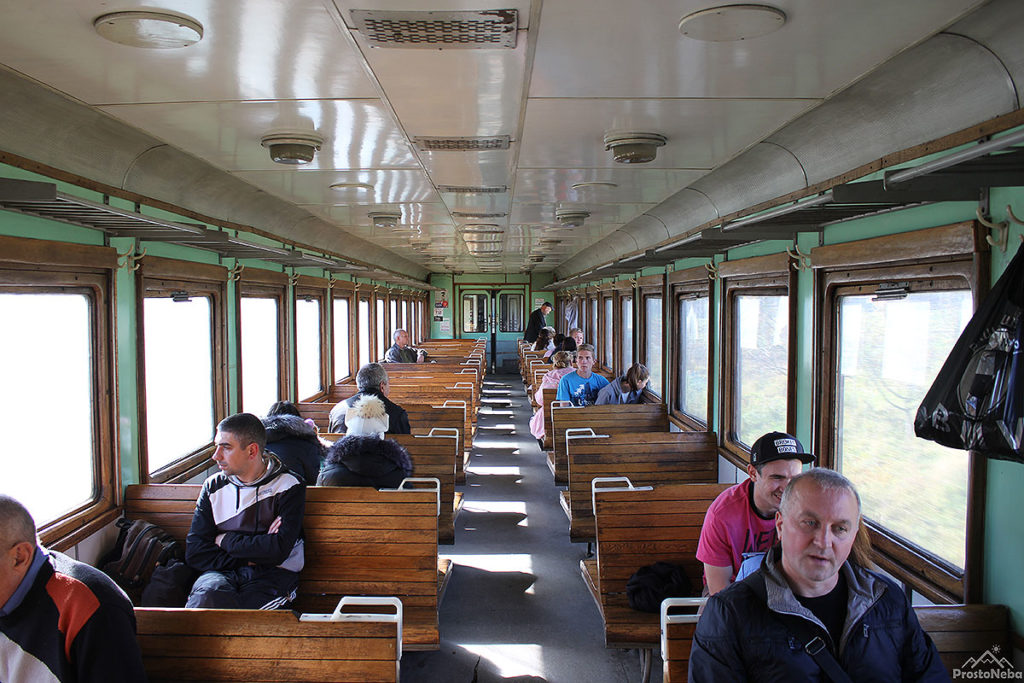 Tips for Train Travel in Ukraine

Should you take a train in Ukraine at all?

Let’s say straight away, Ukrainian railway technology is old (except Intercity trains): trains are slow, cars are old and overcrowded, sometimes dirty, broken and attendants can be rude. But some people believe (we do) that there is a special romantic about it, something that is very sincere.

Train travel in Ukraine can bring you extraordinary life experience and a bunch of stories you’ll tell your friends upon returning home. Though there is also an option to travel in a company of indifferent faces of the neighbours, a clean car and high speed at Intercity trains.

Take a train and enjoy local life, day-to-day concerns and wonderful sceneries from the window (just make sure to chose the clean window ;)).

So wish you good luck in travelling in Ukraine by train and let us know if you have any questions or want to explore some mountains with us!